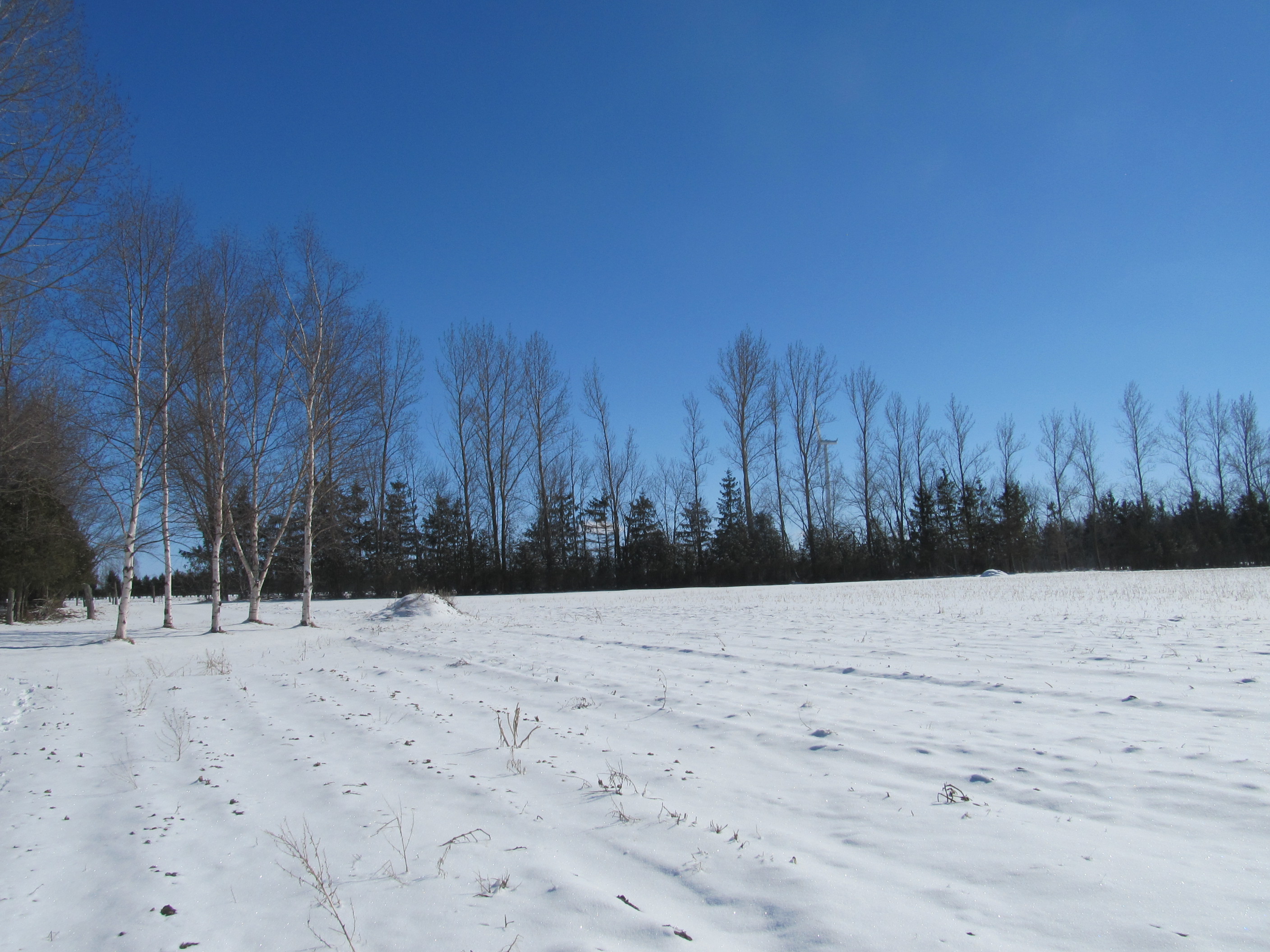 With photos by Sarah Weber

When we crossed the Canadian border into Sarnia, the sky was light, and there were sparkles of snow in the air.  The effect was tropical, to my southern eyes.  We don't get partly cloudy snow down in our part of the world.  I was enchanted.  My Canadian husband was less impressed and directed us to a store to pick up some anti-freeze windshield wiper fluid.  It was a cold weekend, and we were poorly prepared, but the snow that day, and into the night, was magical.

I knew when we walked in the door, nearly at the end of Friday's opening day session of the annual Fellowship of the Preparation Makers Conference (March 2-5, 2017), that we were in a good place.  The conference was held in a historic community meeting hall.  It was a singular spacious room, with a small kitchen curtained off in the back and chairs circled up in concentric rings.  In the middle sat Hugh Courtney, pendulum in hand, holding onto a sizeable apple young apple tree in a pot.  I have always considered Hugh a true "mensch"— a worthy and reliable member of humanity.  I appreciate how he answers questions without assuming overarching authority — he is simply sharing what he has learned.  He has influenced many of the people who have influenced me, and has shown a steadfastness in his dedication to the work of his life that is uncommon in our day and age.  It was a pleasure to see him in this context— in a room of listeners, really absorbing the information he has to share — his life's work, laid out for any who care to try. 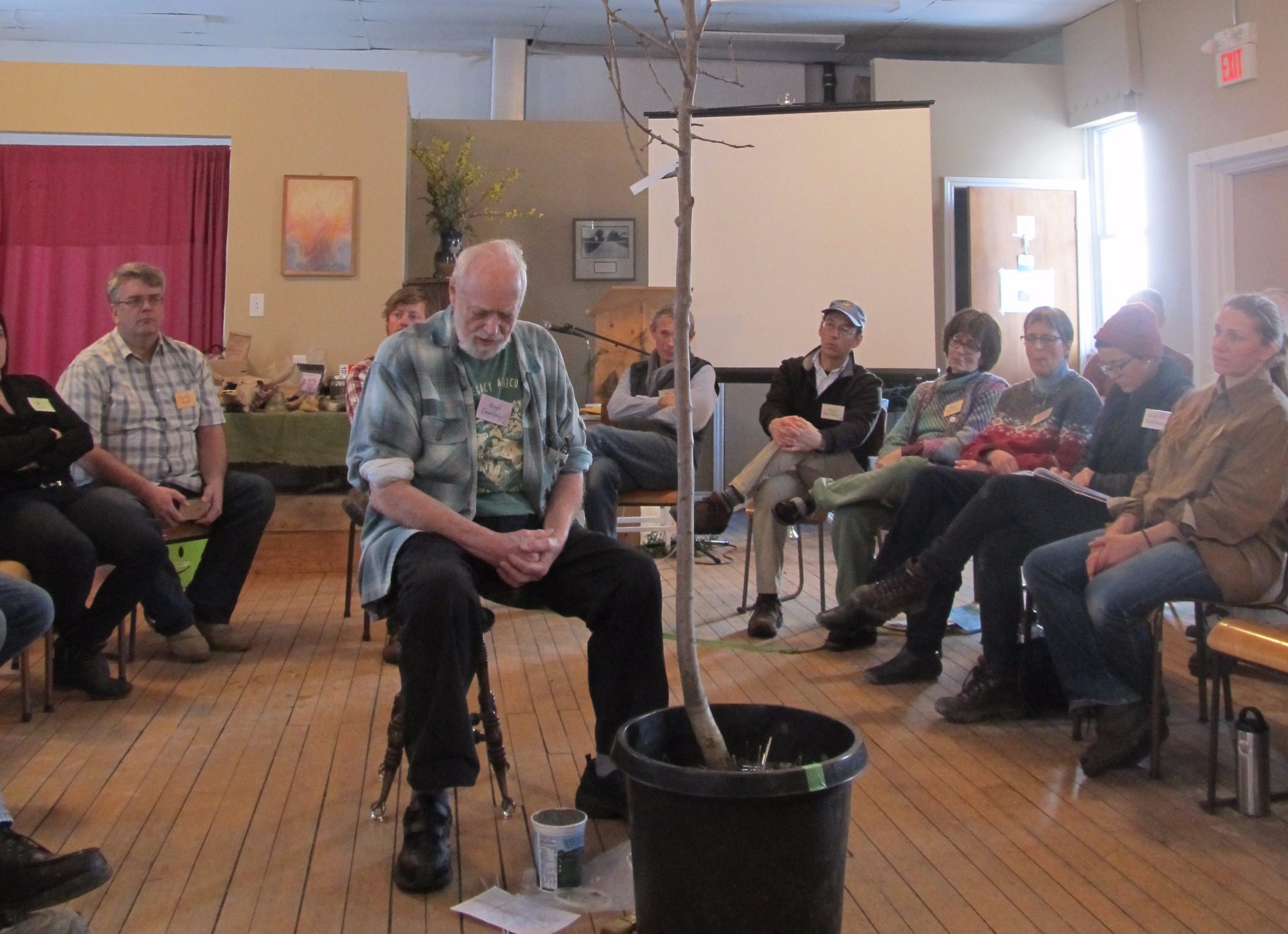 Hugh's presence is an important piece of the Fellowship of the Preparation Makers' work.  Their stated mission — to insure that there are sufficient biodynamic preparations available across the continent to meet the needs of all who want to use them — emerged from the recognition of Hugh Courtney's work at the Josephine Porter Institute for Applied Biodynamics, which largely fulfilled that demand for many years.  The Fellowship continues to be a collection of deeply dedicated biodynamic practitioners, intent on exploring their craft in its blood and bones, as well as its heart and soul. 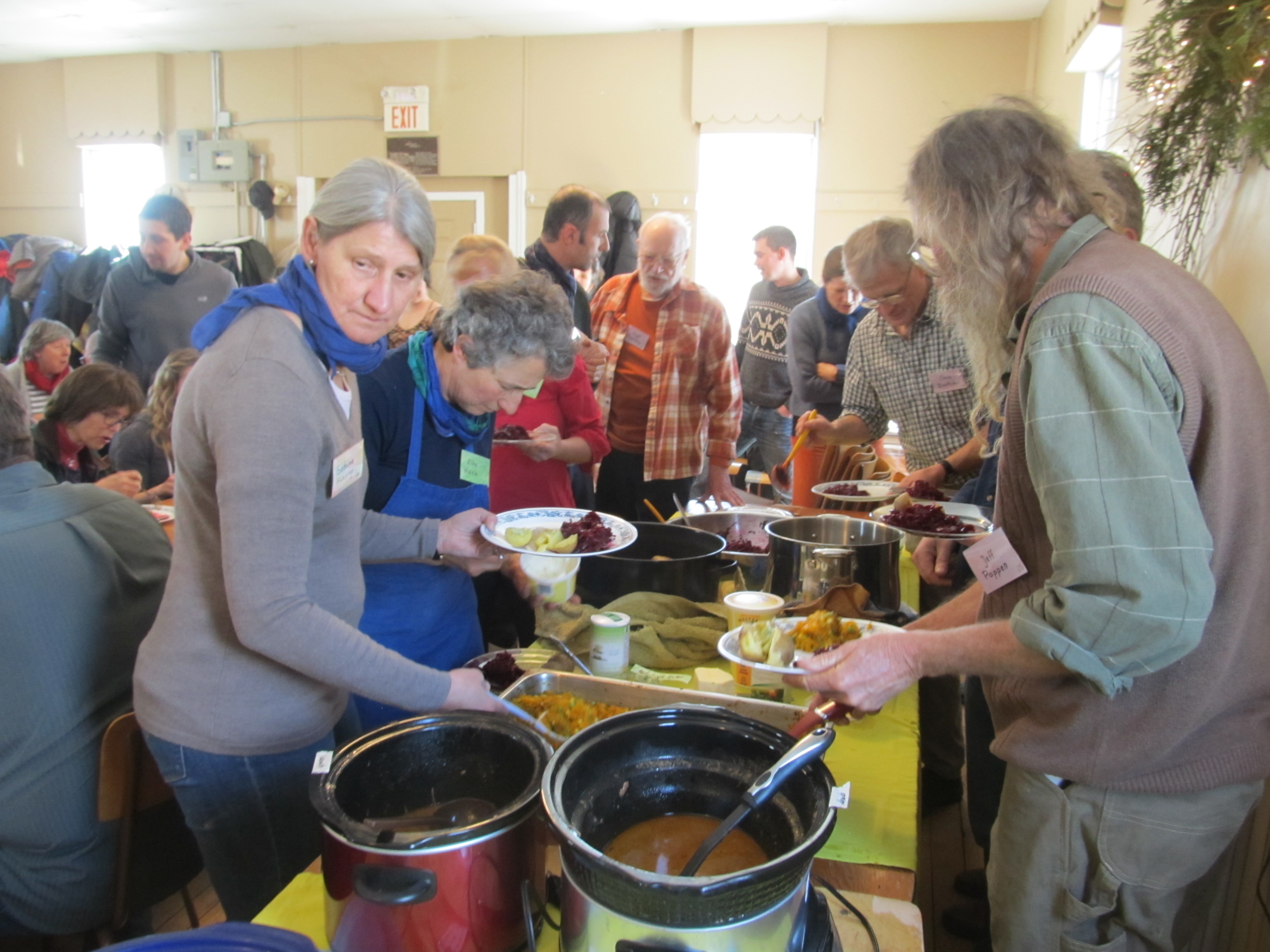 After a satisfying dinner and some mingling in the warmth of strangers who were surely about to become friends, we lined up the chairs again and set out to listen to Reverend Jonah Evans, of Toronto.  I've never heard a sermon like that before, and I would travel to hear it again.  Jonah is an engaging speaker, and he challenged all of us in the room to engage our own inner world in terms of the work we do on our farms.  He asked us to explore the resonant parallels between the activity of preparation making and the activity of the human soul.  Consider the qualities the fresh manure gains from spending the winter underground in a horn, in deep darkness.  What do we gain from passing through periods of darkness, uncertainty, hardship, ourselves? Certainly, under the right circumstances, the passage through darkness increases the creative capacity of soul, and soil.  On both counts, it is a journey whose worth becomes apparent upon returning to the light.  (I could spend this whole article ruminating on Rev. Jonah's message that night.  Please just take the opportunity to hear him whenever it presents itself.)  Laying my travel-weary head down that night, I thought Hugh Courtney and Brother Jonah set our foots on the path for the weekend to come.

Saturday morning, snow-covered and bone chillingly cold, we met the day together in song.  It was reassuring for a newcomer to the Preparation Makers Fellowship (like me) to feel that we were maintaining the strong soul-connection that was set up the night before.  The rest of the morning was spent hearing perspectives from biodynamic farmers in different places.  Chris Boettcher gave a carefully prepared talk about the feedback loops of farming fertility, from animal, to plant, to cosmos, and ultimately, in human farming activity.  Jeff Poppen followed with a comical account of his personal and professional transformation through biodynamics.  The juxtaposition of those two interesting speakers gave us plenty to think and chat about over lunch. 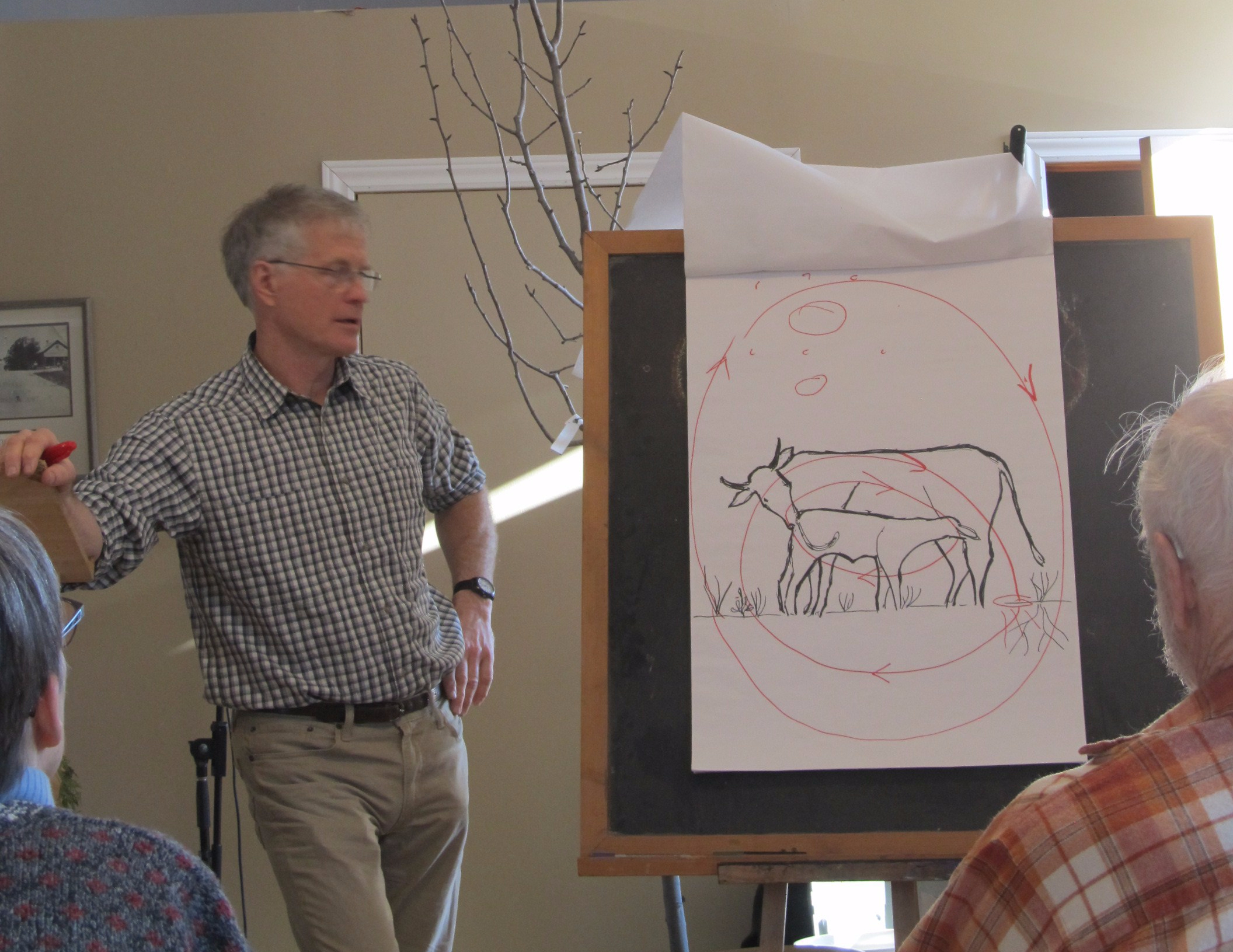 After lunch, we were called to open up to our own perspectives and our capacity for perception.  Pat Frazier led us on a choose-your-own perceptive/creative journey which prepared us for the “meat” of the weekend: horn manure evaluation at the Hack Farm. 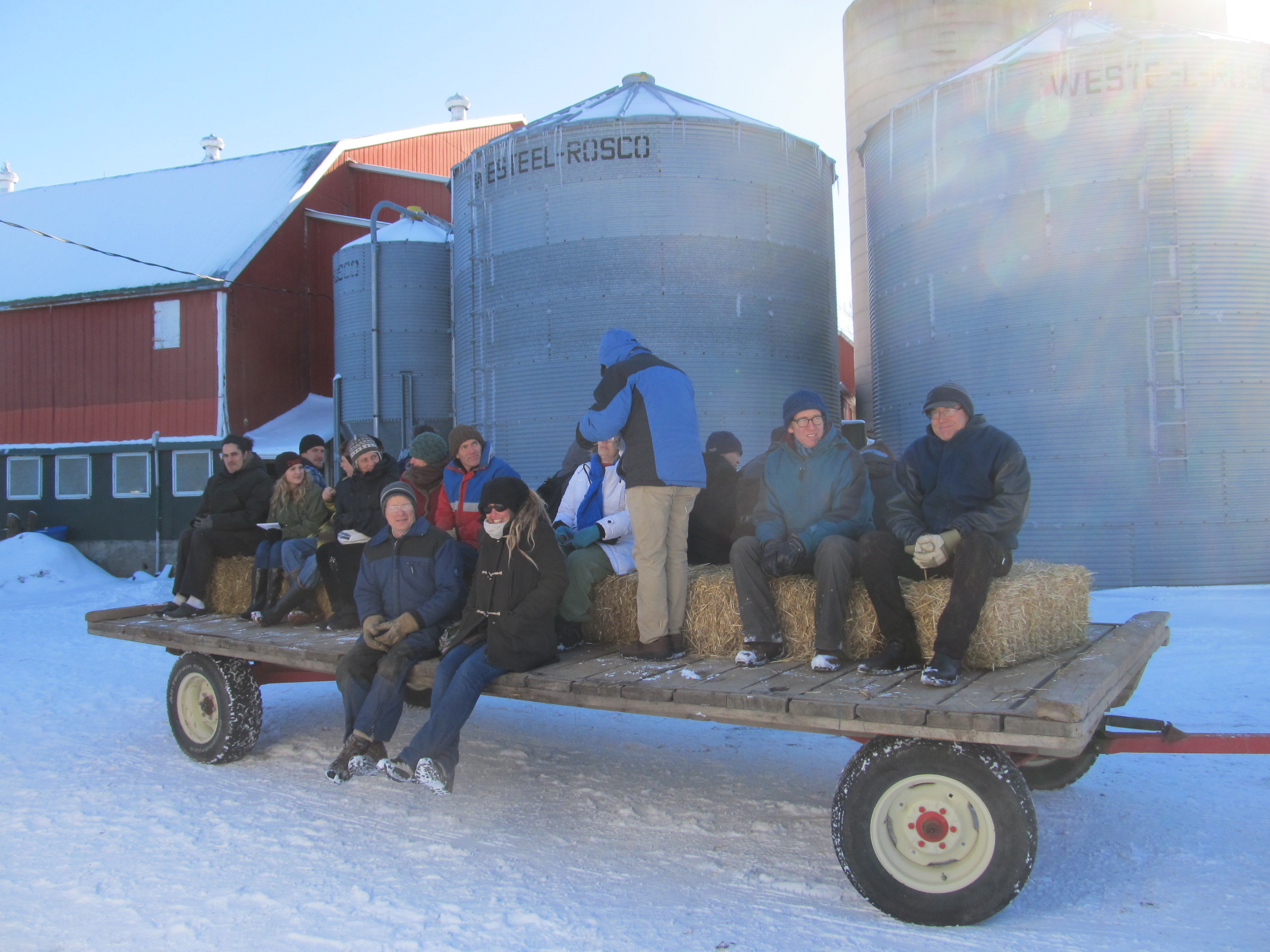 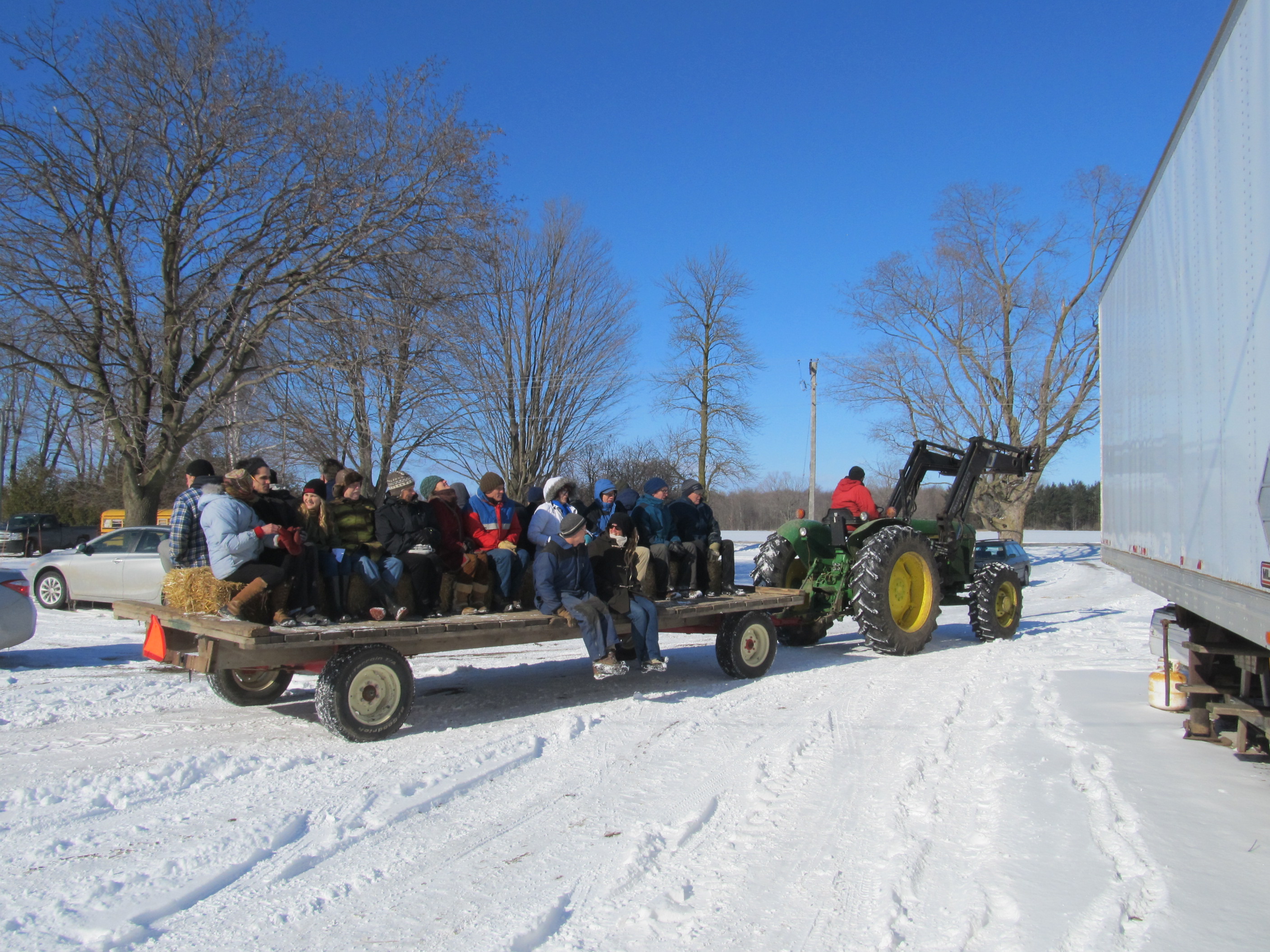 The cold crisp day didn't stop most of us from jumping on a hay wagon for the short ride to the farm.  We unearthed some horns and passed them around.  Some of the horns were new, and others had been used before.  Hugh Courtney spoke of the differences he had perceived in working with old and new horns in the past.  It was an interesting exploration, but I have to admit that I was distracted by the flat expansive fields (the kind you don't see much in middle Tennessee) and the black earth (another rarity in our parts) that Uli says goes about a foot and a half deep.  As part of the afternoon tour, we entered one of the Hack Farm outbuildings, where Wali Via prepared us to encounter horn manure in a different way. On a long table, there were twelve samples of horn manure.  Each was on a plate with a number on it.  There were no other indications about each one.  We were each given a pencil and paper and asked to circle the table and quietly mingle our senses with the samples, scoring our first impressions, and second impressions, and any other impressions as well.  Some of us pulled out pendulums.  Others squeezed the samples, and smelled them.  I was amazed at how different twelve samples of manure packed into cow horns and buried in the ground could be.  One was black, another reddish brown.  Many were sandy and nearly dry.  A few were moist, and one nearly spongy wet.  Wali pointed out to us later that this exercise boiled down to experiencing twelve years of biodynamic work all at once, as so many of us only get to handle our own horn manure, year after year.  It was a powerful exercise, and most of the remainder of our time together was spent discussing our impressions. 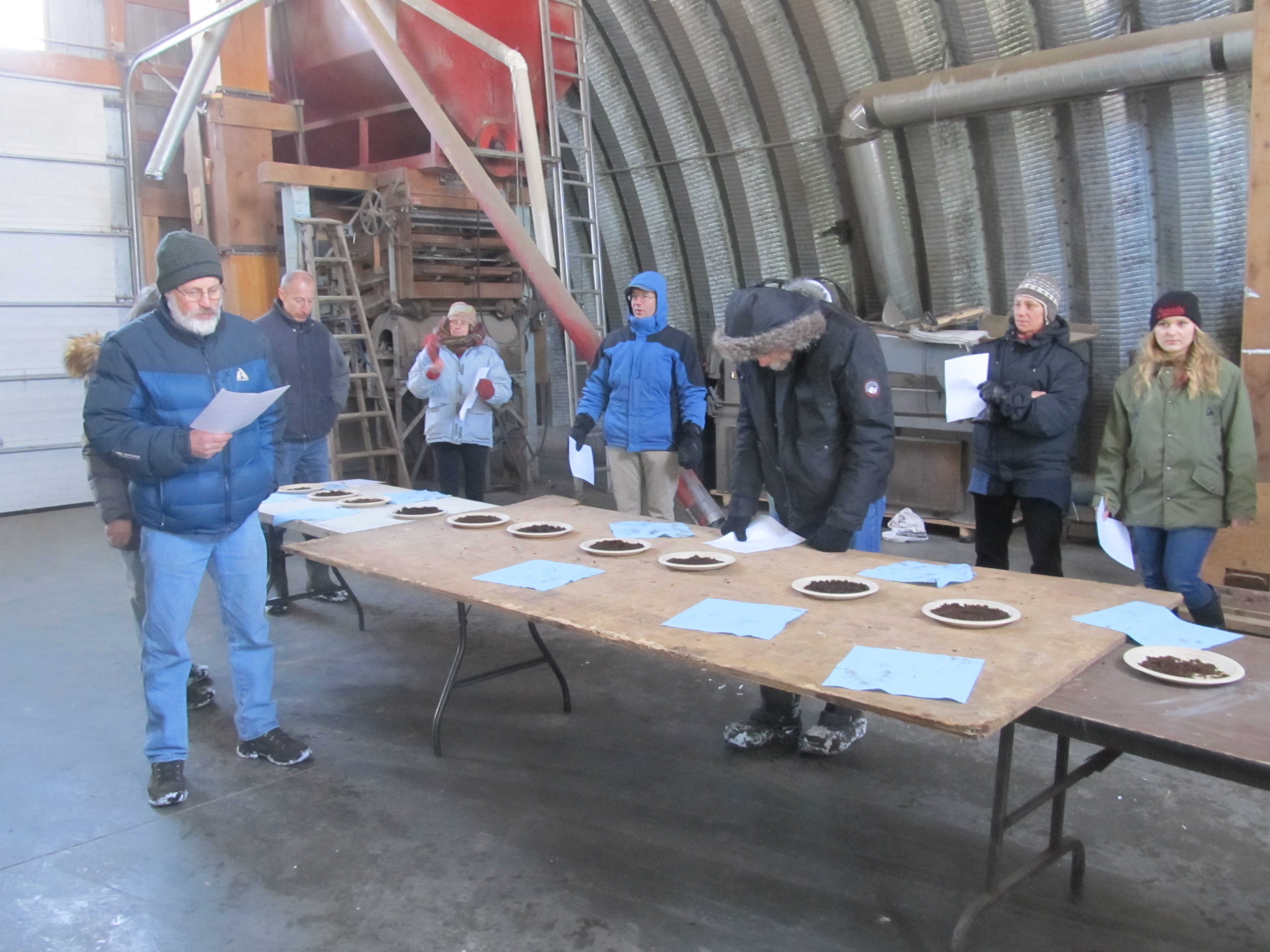 Preparing to evaluate samples of #500 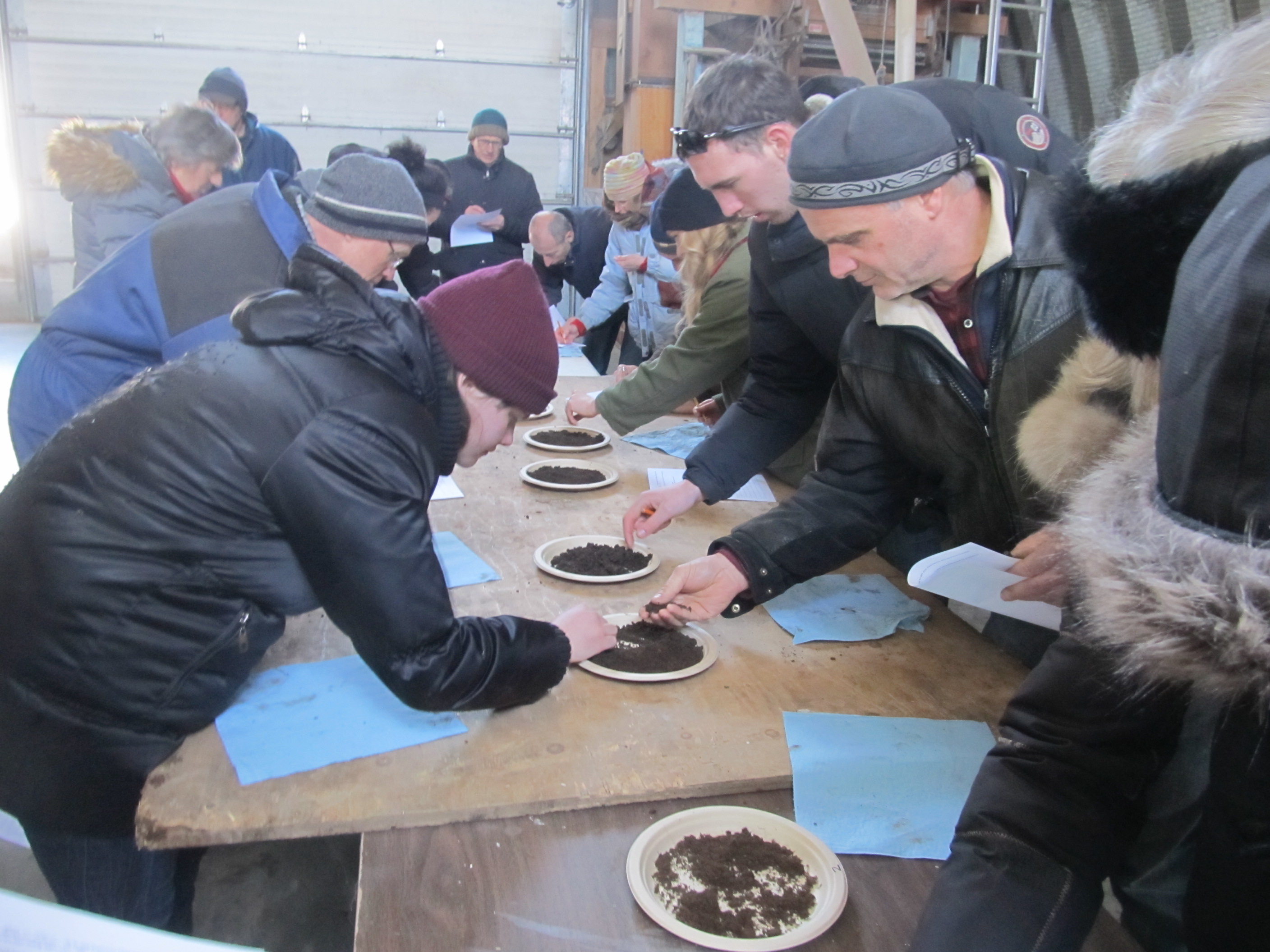 The crowd around the coffee and tea station was thick when we returned to the meeting hall.  As we warmed up, so did the discussion.  With Wali guiding us, we shared our impressions and in turned learned the “biographies” of the preparations we met at the Hack Farm.  It became clear in short order, that the exploration of our experiences and what they mean coupled with the stories of the preparations themselves could have gone on all night.  Thankfully, our mindful hosts turned our attention to other information, and prepared us for some fun.

Following another beautiful meal, we took a stroll through the garden inside, led by Gabi Boettcher as she played Beethoven Sonata No. 8 Op. 13 (Pathetique) for us.  Eric Boettcher followed with a trumpet piece.  We were then visited by a theatrical presentation of a rhyming little troll, who danced on a table and played a ukelele for our pleasure.  This display of a local farming family’s artistic abilities would have been a superb ending to the day, but they weren't done with us yet.  Our chairs were stacked in the corners of the room and we partnered up for a rollicking round of social dancing (which is fun whether you can dance or not).  When we were sufficiently warm from the dance, a line of chairs returned to the center of the room, an accordion was pulled from the closet, and the group played the most competitive game of musical chairs I have ever witnessed.  Emerging flush-faced into the dark, cold night, I was reminded that winters are long in Canada, and by necessity, these folks have mastered a number of ways to strengthen their community and enjoy themselves in the off-season.  What a treat! 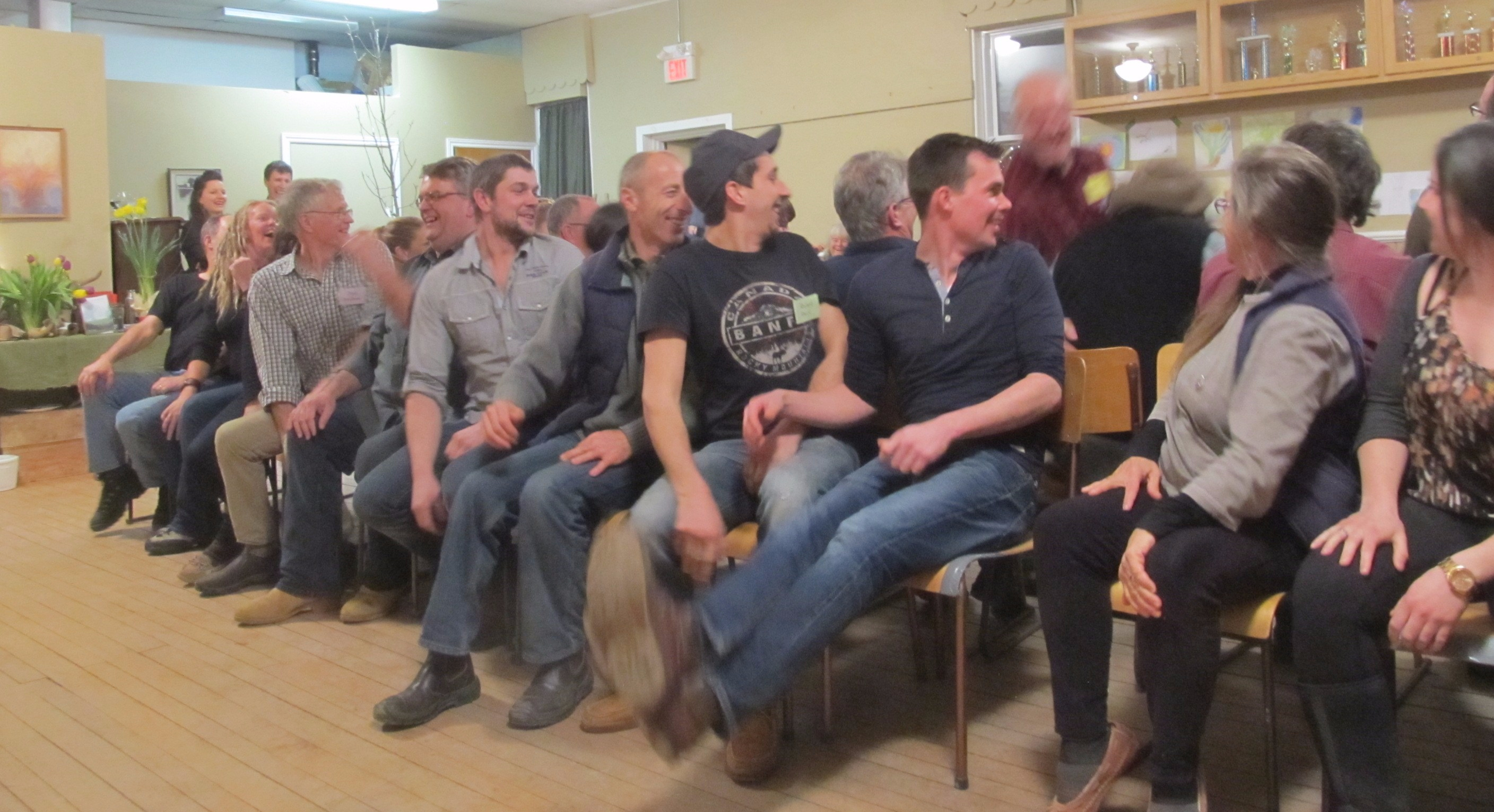 Sunday morning, our curiosity was piqued, and we were ready to continue our discussion of the horn manure samples.  It was interesting to note that, though our impressions of the samples differed greatly, there were some parallels that emerged.  Many of the same people had a negative impression of several preparations, while many others would have a positive impression about the same group of preps.  Personally, I was not able to rate any of the samples poorly, but I was more attracted to certain samples than others.  Hearing different people from the group voicing their experience with each sample was a great lesson in differences, understanding, and the potential power of this kind of perceptive study in a group setting.  We came away with a lot of information, and maybe as many questions as answers.  In other words, a great success.

Circling the chairs one more time, we set about to close the weekend with a final sharing circle and ceremony.  Pat opened the sharing circle and asked us to bring forth our questions as well as our impressions.  The pouring forth that followed was lovely, and served to open our hearts for the closing ceremony, led by Wali.

I want to tell you about the closing ceremony, but I'm not going to.  It's too good to share in print.  If you want to know, the best way is to show up and become a part of it.  This is what I will say — it was a privilege to pour out intentions and dreams into the shared vessel of this event.  It was a privilege to share in the great celebration of all creation that is at the heart of biodynamics, and at the heart of the Fellowship of the Preparation Makers.