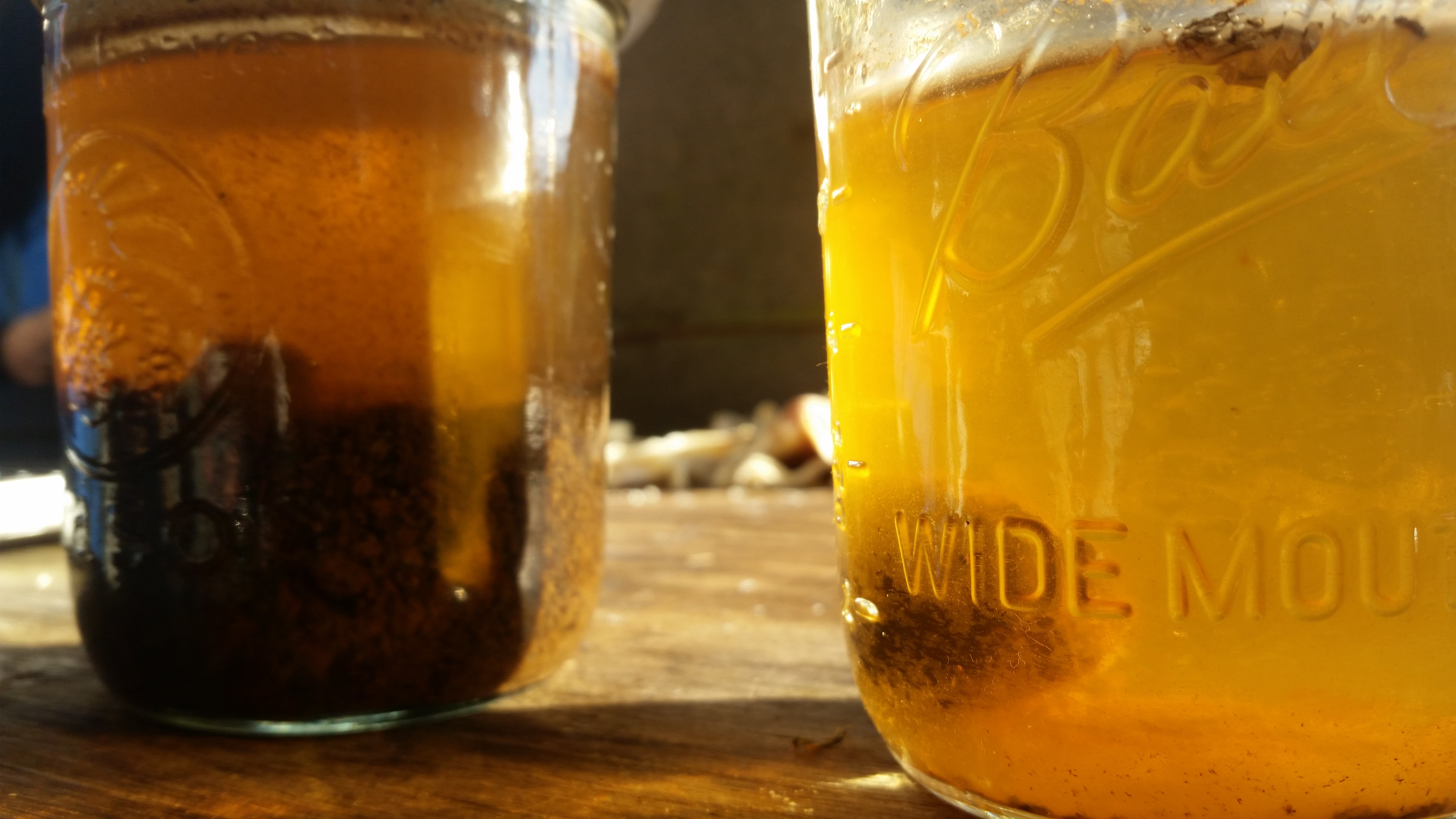 I went to Hugh Courtney’s November, 2015 biodynamic practicum at Earth Legacy Agriculture in Floyd, Virginia, with the expectation that I would get some practical experience working with the preparations. I learned a lot — and not just what I expected.

For anyone wondering about the magic of biodynamics, it isn’t foolproof. Oddly enough, it was my first failure at making a preparation, not my first success, which convinced me all the more that there was something to these preparations. My failure meant that there were objective quality standards — ones I could perceive for myself. After a year-long wait, I discarded the contents of forty horns and set about trying again. But now I knew that success at making preparations wasn’t automatic. If success was not automatic, then there was a spectrum of successes dependent on my knowledge, experience, and innovation. That’s why I went to Hugh Courtney’s.

Courtney doesn’t believe in merely thinking or talking about biodynamics; there is nothing vague or abstract about the work of biodynamics. I cleaned intestines and filled them with chamomile. I cleaned a cow’s head. In my brief visit, we dug up the oak bark, nettle, and chamomile preparations. We selected fresh cow patties. Hugh Courtney discussed timing considerations for making the preparations and using them. He explained how to store the preparations well.

If there are specific questions about preparations, whether to make them or utilize them, Hugh Courtney is quite accommodating. He tries to meet everyone’s needs and answer as many questions as he can. If you ask him a question about something he does not know from direct experience, rather than hypothesizing, he will likely tell you, “Let me know what you find out!” He will not simply answer your questions with abstract speculations. He will put you to work answering your own questions, as any responsible teacher should. He answers from the heart and from hard school of experience.

I am confident that any participants at the November 2015 biodynamic practicum who spent a longer time were shown considerably more than I was able to see. There are few places with so much wealth of experience available so reasonably.

There’s a lot of hype about “indigenous microorganisms” (IMOs) these days, but if you look at biodynamics, that’s what it’s been doing for a long time, now. Hugh Courtney, more than most, encourages each farmer to make his or her own preparations. Even if we only think on a microbial level, preparations born on your own farm are almost certainly more “at home” on your farm. On the other hand, if your quality standards are not high enough, the elemental forces you encourage may not be so benevolent.

My first attempt at horn manure failed — all forty horns. I’d done my best to put the horns down at a good time and to source organic grass-fed local manure from a lactating cow. After waiting all winter, I dug up a couple horns only to find they were still green. My nose has always been very sensitive, so it took only a single sniff to decide: none of these were any good. I put them back into the ground and waited, but once fall arrived, they were no better. I discarded all of them.

My concrete disappointment galvanized me to visit the Courtney farm finally. I took my (failed) horn manure and presented it to Hugh. He took the horn manure, felt it in his hand, smelled it, and then asked for a glass of water. He indicated that, despite my own unfavorable assessment, it was “not without value” and wished that I had brought not the best but the worst as well to contrast the two. He pressed the manure I’d brought into a ball and dropped it in the water. Within moments, it had begun to dissolve into amorphous sludge. This wasn’t a good result.

If you tried your own compost at home, I doubt it would fare better. Astonished, I asked Hugh, “Why would I ever use that old one over this one?” Hugh said, with a twinkle in his eye, “Because you don’t know about this one.”

We can see with our own eyes the profoundly clayish quality of the “prepared” horn manure. Good colloidal humus behaves in many ways like a good colloidal clay. The following quote might bring home the massive importance of high quality colloidal substances:

"Some clays, such as montmorillonite and vermiculite, have a surface area as high as 800 square meters per gram, over 200,000 square feet (almost five acres) per ounce!" — Michael Astera, The Ideal Soil

And good humus usually has two to three times surface area than good clay![1] The regular horn manure is good humus, but the “prepared” horn manure appears as nearly perfected humus. If you want to learn how to have better soil, this is where you learn.

In the probable case that you, like me, need improvement, Hugh Courtney offers practical hands-on instruction for any individuals with an inner drive to develop the living organs of their own farm organism. For those unable to attend, Earth Legacy Agriculture, LLC does offer a wide range of quality biodynamic preparations and consulting services.

After a few days working at the November 2015 practicum, I felt like I had accomplished a lot — and I really had. But when Hugh Courtney gave us a “checklist,” I realized that I had performed less than ten percent of what he said is the groundwork for “being on your way to becoming a master preparation maker”!

The lessons learned from Hugh Courtney are first, work, and second, work; never are we permitted to drift along in a dreamlike cloud of unworkable notions. Abstract ideas that are not translated into reality are not healthy ideas at all. Ideas are well and good, if they have a living and productive relationship with the world. As Goethe said, “Only what is fruitful is true.”

And you don’t have to understand how it works, which is one of the great things about America and its (relative) lack of superstition. Our own prosaic version of Goethe’s poetic expression might be: “If it works, it works.” And you can see it with your own eyes: it does work. It is fruitful, and therefore it is true. We can work backwards to figure out how it works — provided we have the time and inclination — but we first have to start with what works.

If we remember, Steiner said in the Agriculture Course that “[Life] does not consist in mere thought.” You will know a tree by its fruit. Ideas that lack the vital force to bring forth action in their host are not true ideas, however enchanting they may sound. You can evaluate the operation at Earth Legacy Agriculture by its generous fruit. So much of what has grown there has travelled far and wide, continuing its good mission without fanfare.

Enlivened by the activity of learning under Hugh Courtney’s guidance, back on the farm we got to work: we took our nettles and buried them. We stirred manure for an hour and buried it in horns. We made our own barrel compound pit and filled it, too. We got in touch with a local processor for bladders — we have even already acquired a sheep’s head and filled it with oak bark and buried it in a suitable location.

Imagine what I might have learned if I’d stayed the whole time!

Stewart Lundy is a biodynamic gardener and farmer on the Eastern Shore of Virginia. He founded Perennial Roots Farm with his partner Natalie in 2010. It started off as a homestead, and out of the surplus grew into a farm. They first heard about biodynamics in 2010 in Italy, but it took three years before they started to incorporate biodynamics into everyday practice on the farm. Perennial Roots Farm is now firmly grounded in biodynamics and is home to rabbits, chickens, ducks, geese, turkeys, sheep, and pigs. Cattle are scheduled to arrive in 2016. When not out and about on the farm, Stewart can be found immersed in a pile of books. He can be reached at perennialroots@gmail.com or through his website.

Hugh and Jeremiah are already planning next year's BD Camp/Fall Practicum tentatively scheduled for November 2 through November 12, 2016. A Farmer's Circle during early 2016 is also contemplated for January 12, 13, 14. The JPI board decided to leave the Courtney farm in 2013 and is in the process of finalizing the purchase of their own 25-acre farm by the end of the year. Earth Legacy Agriculture, LLC was founded in 2009 by Hugh and Jeremiah as a vehicle to carry on certain aspects of the biodynamic work in the future separate from JPI, which Hugh founded in 1985. Contact Earth Legacy Agriculture at 276-930-1377 or email grow@earthlegacyagriculture.com for further information.